1 book containing signatures of visitors to the Logan House gardens between 1949 and 1967. Signatures include many significant figures in the horticultural world- Euan and Peter Cox, Vita Sackville-West using her married name of Nicolson, Cicely M. Crewdson, George Taylor, numerous landowners, members of RBGE staff and, in 1955, HRH, Elizabeth R.

Box 6: 1920-1984; Farrer's death and post-death, including poem written by Farrer one week before his death 'found in the pencil copy of the Empty House' [Farrer's last unpublished novel]; telegram sent to Farrer after his death; correspondence relating to Farrer's death - correspondents include E.A. Bowles, Hugh Faulkener; F. Vivian Clerk, Bidder, Sir Francis Younghusband, Sepoy Jange Bhaju, E.H.M. Cox, J.T.O. Barnard, S.M. Frank, A.W. Porter, W.T. Stearn and Charles Graham and telegrams reporting death and letters about location and upkeep of the grave; photographs relating to Farrer's grave; undated correspondence - letter from William Purdom to Farrer; Rev. Henry Jardine Bidder to Farrer, and 4 undated letters from Farrer to his parents [mention of autocars in London]; postcard showing Edith Sitwell from Edith to Farrer's mother, March 1922, and photograph of Edith as a child [Sitwells are related to the Farrers] and collection of book reviews collected by Farrer, 1901-1920. 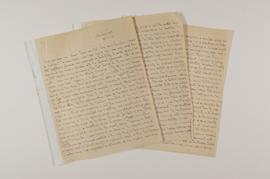 Pleased to get letter from Ernest Gye, nickname Poison - shared letter with Jumps [Euan H.M. Cox]. Speaks of the restless desire to impress & seeks gossip of English friends. Ernest writing of going to Tangiers. Describes at length he and Jumps picking raspberries to make jam, concoction insipid. Then reverted to making better jam with wild white strawberries. Writes of Jumps as youthful, unlike him who is becoming of crabbed age. Describes how a brace of young boys, Gurkhas have joined their camp. Painting primula in a tent, through a dense fog of midges and smoke. Requests from Ernest to purchase 2 or 3 Everyman volumes of Floris's Montaigne, delights in the first one. This letter is signed your loving Poppet. Jumps cooking until the Chinese cook has recovered from his cliff fall. ps Gossipy enquiries and comments. Encouraging E. Gye when writing, to be thoroughly indiscreet and viscous. Speaks of his own return to a de-Poisoned London. [Poison = E. Gye] Describes the place abounding in the most preposterous brambles - titanic wilderness of thorns, beset with raspberries in almost every colour & degree of nastiness. Wondering if Jumps [Euan M. Cox] is like all Scotch lower (or middle) class minds, are alike in a sort of Jackdawish unassimilating appetitiveness.

Yesterday, a coolie brought three letters from E. Gye, and 90 others from friends, all sopping wet and these were dried over the kitchen hearth. Pleased to get them, gives advice about E. Gye's life although aware it is likely to be out of date - surprised E. Gye going off to Tehran and sad he will not be in London when he returns. Writes again that he is enjoying his solitude without Jumps [Euan H.M. Cox] as he felt responsible for his enjoyment - in camp it has been raining solidly for 3 weeks. Rewriting his book called Empty House about which he begs E. Gye to comment. Writes of Amelia, a friend again, thanks E. Gye for a book. Notes he has received money from R.G.S. (The Gill Award) £36 & royalties of £24 from the Eaves, which he views as windfalls. ‘All letters were sopping wet, caked into a pie. Sadness can't be allowed to mean shirking: one may cry over the broken eggs but the omelette of life has to go on being made all the same. Indeed I'm an egg myself: appreciate me please.’

Writes of long descent from Moku-ji, stung by bees- wearying and enjoying relaxing reading his new books and letters he has received. Concerned about Ingleborough and asking if the seeds he sent are growing? The book, Empty House, he has been writing, he intends to send to Ernest Gye, instructing where to get two copies of the manuscript typed, one to be taken to A.S. Watt, agent and other to be read by E. Gye and Jumps [Euan H.M. Cox] then sent out to Peking where R. Farrer will amend it further - proposes a timescale for this process. The book is about his last 3 years of travelling. Pleased Jumps is going to start a literary career in London and will have his company.

Responds to Ernest's sense of being slighted, not receiving as many letters as others, saying that his gaps in letter writing due to being in camp and nothing of interest happening. He gives advice regarding Amelia, a possible liason of Ernest's, to forget her. Looks forward to having parties with Ernest, maybe at Ingleborough with him and Jumps [Euan H.M. Cox] unpacking items he's brought from Peking. Although wonders if Ernest may be in Britain as talking of going to Persia. Tells Ernest he has written to Jumps regarding weeds & weather which he is sure he will get to read. Suggests that this country is rather boring and does not generate a creative impulse. Spent one last fortnight in the Alps, seed collecting and now resting for a month in Nyitadi. Rambles about Greek and other characters and of his own writings. Again remonstrates that he has been a regular correspondent to E. Gye as regular as to his Mommer.