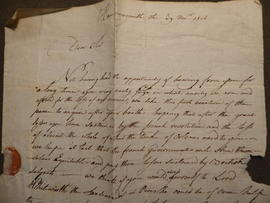 Thomas Blaikie was born in 1751 in Corstorphine, the son of a market gardener. It is suggested he may have been a student gardener at RBGE and possibly then worked at Kew, the Hammersmith nursery and Upton House in East Ham for Dr John Fothergill. He was engaged jointly by Dr Fothergill and Dr William Pitcairn to undertake a plant collecting trip in the Swiss Alps from April to December 1775. In September 1776 James Lee of the Hammersmith Nursery engaged Blaikie to provide plants for the Comte de Lauraguais and he was subsequently employed to work on the Comte’s garden in Normandy. From 1778 he was employed in the gardens at Bagatelle by the Comte D’Artois, the youngest brother of Louis XVI and future Charles X. He also worked at St Leu, Monceau and Le Raincy for the Duc de Chartres (who later became Duc D’Orleans and then Philippe Égalité) and undertook a number of private commissions. It is also thought that he was involved in making alterations to the gardens at Malmaison.

Blaikie is credited with introducing the English style of gardening and British gardeners to France, where his method of grafting came to be known as ‘graffe Blaikie’. He died at his house on the rue de Vignes in Paris in 1838. His diaries covering the period 1775 to 1792 were published in 1931, entitled ‘Diary of a Scotch Gardener at the French Court at the end of the Eighteenth Century’.

Blaikie's wife is known to have passed items to a friend, who in turn passed them to the Baynham family (source: 'Thomas Blaikie: The 'Capability' Brown of France 1751-1838' - Taylor, Patricia, 2001)

Material is open for consultation on appointment with the archivist.

Permission for reproduction is required from RBGE.

The material is very fragile, requiring careful handling and the use of gloves for photographs.

The collection also includes two frames that previously held two of the images, but have been damaged in transit. There is also a University of West Virginia baseball cap included by the donor.