• A catalogue of the plants gathered on the islands of North Uist, Harris and Lewis during a botanical excursion, (August, 1841).
• Copy of Syllabus Botanical Lectures (1862)
• Two letters to Parnell dated 1847 and 1848
• Two letters to the Botanical Society dated 1841and 1843 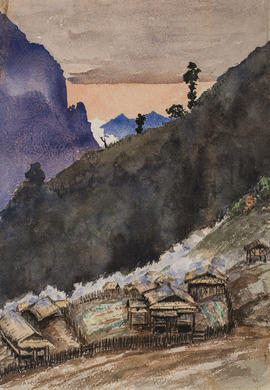 THE COCKER NOTEBOOK – FLOWERING DATES FROM 1899
A notebook, approximately 4 x 6 inches, was received by the Archives of the Royal Botanic Garden Library, Edinburgh in 2005. It lists first flowering dates of alpine plants grown in the Garden during 1899. The importance of this record is that it fills a gap in the observations of flowering made at the Garden from 1850 to 1939. These historical records are proving valuable in the increasingly important science of phenology, which is the study of seasonal events in relation to climate change.

The first page of the notebook bears, in ink, the name ‘C.L.Cocker’ (Clement Lumsden Cocker) and ‘Alpine plants’. Apparently later annotation expands (in pencil) the title to ‘Record of Alpine plants flowered in the R.B.G. Edinburgh during the year 18.99’. There is also what appears to be an accession/library number ‘OX 37.59.30’, the meaning of which is not clear.

Cocker was employed at RBGE from 12 December 1899 to 5 April 1901, as we know from his employment record (Royal Botanic Garden Edinburgh Staff, v. 1, p.102) held in the RBGE Archives. Fortunately the notebook was accompanied by a letter of appointment, dated 2 December 1899. Cocker was previously employed by Mrs N.G.Clayton of Chesters, Humshaugh in Northumberland, and in 1901 went on to be Outside Foreman at Colesbourne.Park, Cheltenham, Gloucs.

The early pages of the book are laid out in columns across each double-page spread, with date (presumably of first flowering), name of plant, authority, family, country. The earliest records date from February, and the latest – on the back cover – are from July. It is not clear why the record does not include January, since plants were regularly recorded in flower in that month up to 1895. Towards the end of the book the double-page spread is abandoned, and each page lists date, name and family only. The total number of plants recorded is 748, of which about 30 are now being monitored in the current (since 2002) phenology research programme at RBGE.

If the date on the title page of the notebook is correct, it seems that Cocker did not himself make the observations recorded in the notebook. The handwriting is neat and consistent, meaning that the records were probably not written out of doors. One possibility is that, as a new employee, he was given the task, possibly on dark winter mornings, of writing out someone else’s observations, either to make a neat copy for an official record (in which case, why did he retain the notebook?), or as a way of getting to know the range of plants grown in the Garden, and when they could be expected to flower. This might also explain why the record ends arbitrarily in July, on the inside back cover of the notebook: if the notebook was meant mainly as a training exercise, it would not be particularly important when it was abandoned.

The notebook might well represent a continuation of the programme of observations, the results of which were published from 1850 to 1895 in the Transactions of the Botanical Society [of Edinburgh]. For 1895 the list contained 40 taxa, and 14 of these appear in the 1899 notebook. Some others may have flowered before February, or after July 16th. From 1906 flowering was recorded weekly.

Important results are emerging from the current phenological monitoring in the Garden, and these owe their value in part to the extensive historical record for some species, which provide a baseline against which to judge current observations.

1 box of general correspondence, photographs, floral diagrams and correspondence between Darlington, Hall and B.L. Burtt about Collin’s material.
1 box of drawings and descriptions of crocus