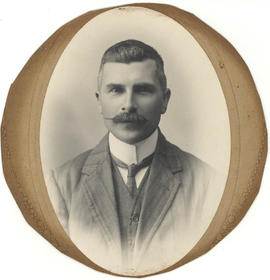 Born 1872; died 1965. Plant collector
George Cave trained as a Kew gardener, graduating in 1895. In 1896 he became assistant at the Botanic Gardens, Calcutta and in 1900 was appointed Governor of the Cinchona Plantations, Mungpoo (Bengal). In 1904 he became curator of the Lloyd Botanic Garden, Darjeeling. He went on numerous plant collecting tours in Tibet, Nepal and Sikkim and some diaries from these tours are held by the Royal Botanic Garden Edinburgh.
Sources: Desmond; Rowena Cave, ‘George Cave’s Diary, Sikkim 1906’.
D.W.

Bertha Chandler (Mrs. C. Norman Kemp) was the first woman to obtain the degree of D.Sc. of Edinburgh University July 1915.

Born Sussex 1897; died Oregon, U.S.A. 1969
Harold Comber’s father was head gardener at Nymans in Sussex and on leaving school he worked there for two years, before moving, aged 17, to Colesbourne Park, Gloucestershire where he managed the glasshouses and botanical collections. He studied horticulture at the Royal Botanic Gardens, Edinburgh from 1920 to 1923, obtaining exceptionally high marks in all his subjects. This made him an ideal candidate for two plant-hunting expeditions in the Andes sponsored by the a group of wealthy gardening enthusiasts in 1925-26 and 1926-27, from which he sent back seeds and herbarium specimens of over 1200 species, including the Chilean Fire Bush and several species of Berberis and Eucryphia. In 1930 he made a further plant hunting trip to Tasmania and on his return took up the post of manager of the Burnham Lily Nursery in Buckinghamshire. In 1952 he emigrated to America to take up a position as lily hybridizer at the Jan de Graff Oregon bulb farms, retiring in 1962. In retirement he remained active, writing prodigiously and listing the native plants of specific areas for the Native Plant Society of Oregon and at the time of his death was revising his monograph on lilies of the world. In his lifetime Harold Comber collected many species new to science, a new genus Combera was named after him.
D.W.