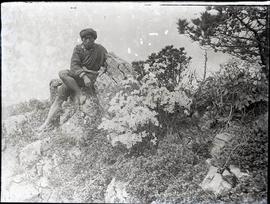 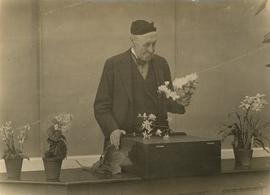 Box 1 of 2 (A04)
•GB235 ALS/1 “Botanist Royal,” biography of Charles Alston, by J.M. Alston. Typescript copy (London, February 1980) from the original(?), deposited in the National Library of Scotland.
•GB235 ALS/2 Plantarum Medicinalium Etc., with ms. annotations. Text block with spine, loose front cover, missing back cover, 120 pp.
•GB235 ALS/3 20th century copy of manuscript widow’s petition by Mrs. Alston to H.M. Treasury asking for an allowance to maintain the Physick Garden at Holyrood House, 1762.
•GB235 ALS/4 Typescript and ms. copies of papers and correspondence, including biography of Charles Alston; history of the Alstons of Thinacre-Milne; list of Alston’s works; advertisement by John Hope for the publication of Alston’s Lectures on the Materia Medica, 1770; “Catalogus sive Index Plantarum.”
•GB235 ALS/5 Typescript and ms. copies of papers and correspondence regarding the history of the RBGE, 1716–1909. Includes manuscript copies in Isaac Bayley Balfour's hand, of Alston's Royal Warrants from the Register of the Privy Seal, and Alston' typewritten entry from Allibone's Dictionary, and copies of letters from Kinnear (1890), and to D.W. Kemp (1904) and Britten (1909)
•GB235 ALS/6 Typescript and ms. papers and correspondence, including biographical sketches and notes on the life of Charles Alston; catalogue of works by Alston, c. 1908–1913. includes correspondence from Isaac Bayley Balfour to Prof. Eggeling at Edinburgh University to ask permision to copy relevant information pertaining to Alston and presumably history of RBGE from documents held at the University.
•GB235 ALS/7 Papers and correspondence, including letter from Charles Alston, 1726 (photographic copy); ms. letter to Prof Balfour from Alex. P. Stevenson regarding “the Alston M/S and the Bower,” 1907; extracts from Mackay’s Journey through Scotland (printed 1723, 1729); typescript and ms. notes on the appointment of Charles Alston as Professor at the University of Edinburgh.

The Collection comprises one of Isaac Bayley Balfour’s scrapbooks in which he collects together copies of information, correspondence and postcards relating to George Don and correspondence relating to this search. The rest of the collection consists of 11 folders of correspondence, papers and photographs, some seemingly associated with the scrapbook, presumably being sent to or copied by Balfour as part of his investigation, but not filed within it, presumably due to their size or bulk. There are also photographs, biographical information, and an original plant catalogue and letter by Don.

•Copy of the first page of a paper by I.B. Balfour titled ’The Pandaneae of the Mascarene Islands’, 1875