Born Hampshire 1805; died Edinburgh 1876.
Educated in Ayr, Edinburgh and at the universities of Glasgow and Edinburgh, James Crauford became an advocate in 1829, building a criminal practice in the justiciary and church courts. In 1849 he became sheriff of Perthshire and in 1853 was appointed solicitor-general for Scotland. He was made a lord of the court of session and then a lord of justiciary in 1855, taking the courtesy title of Lord Ardmillan after the name of his father’s estate in Ayrshire. He held both posts until his death at his residence in Charlotte Square, Edinburgh.
Source: Dictionary of National Biography
D.W.

Born Surrey 1882; died Westmoreland 1966
Cicely Nichols, the daughter of a Surrey printer, married William Crewdson a barrister and later High Sherriff in 1907. In 1911 they moved to Westmoreland eventually having three daughters. In 1914 William Crewdson went to war, serving in Burma where Cicely joined him in 1915. She returned home in 1916, William in 1919. After the war Cicely’s interests turned more and more to flowering plants, particularly alpines, which she grew in her garden at Helme Lodge, Kendal. In 1931 she had an article published in <i>‘Popular Gardening’</i> and thereafter produced a series of articles in various Alpine Garden Society magazines, including the <i>Journal of The Scottish Rock Garden Club</i>. Her expertise developed through a lifetime correspondence with alpine specialists and she brought back seeds from her travels in Europe. Primulas were a particular speciality but she is best known for her hybrid blue poppy <i>Meconopsis crewdson</i>.
Source: 'Recollections of Cicely Maud Crewdson', unpublished family memoir in RBGE Library.
D.W.

Born Cyprus 1907; died 2003
Hagop "David" Davidian graduated in botany from Edinburgh University in 1946 and in 1947 was offered a post at Royal Botanic Garden Edinburgh by Sir William Wright Smith, Regius Keeper, to work on the taxonomy of rhododendrons. Rhododendrons became his life long specialism and enthusiasm. He contributed regularly to the RHS Rhododendron and Camellia Yearbook and at one stage identified 2,000 rhododendrons from the Arnold Arboretum in the USA. Honoured twice by the RHS and in Sweden, after his retirement in 1972 he set to work writing, in four volumes, books on the genus based on the Balfourian system.
Source; cuttings and obituary files
D.W.

Robert Chapman Davie was born in Lisbon in October 1886, but moved to Glasgow and was schooled there at the Glasgow High School, before going to the University of Glasgow in 1904, where he graduated with a first class honours M.A. in English. This degree included some scientific courses, including one on Elementary Botany taken in 1905, and Davie found himself drawn more to that subject than English, so went on to pursue this by enrolling for another degree, a BSc. in Botany, Chemistry, Zoology and Geology, graduating in 1909 after winning the Dobbie-Smith gold medal for Botany along the way. He stayed at the University of Glasgow, becoming an assistant in the Botany Department before moving to the University of Edinburgh in 1912 to become a Botany lecturer under RBGE Regius Keeper and Professor of Botany, Isaac Bayley Balfour. Davie was given special charge of the large Teachers in Training classes and lectured on hepatics (liverworts) and mosses to Edinburgh University Botany students at the Garden. He carried on with his own studies throughout his teaching career, and soon had enough material to research a doctoral thesis on the subject of pinna-trace in ferns, and he completed this at the University of Glasgow, graduating with a DSc in April 1915 whilst still teaching and working at Edinburgh.

Davie’s research was interrupted in 1914, not by the war at first, but when he obtained a grant from the Royal Society to travel to Brazil to research comparisons between flowering plants. He was still working on the material he collected there when the call to join the military service finally came in 1917.

Due to effects of ill health when he was younger, it was known that Davie would not have been fit for a role in a combative branch in the army, and this may be why he wasn’t called upon to enter service until 1917, despite him apparently offering his services when war broke out. Another reason may be that his specialism in mosses meant that he was heavily involved in the work RBGE was doing in offering specialist advice to those engaged in collecting sphagnum moss to aid the war effort – the moss was used as an alternative to cotton in making would dressings, it being highly absorbent and antiseptic too. Finally though, in 1917 he was enlisted to the Royal Army Medical Corps, to a role which took full advantage of his scientific training – a Lieutenant, later promoted to Captain, and Senior Chemist in the 4th Water Tank Company, providing clean and sterile water to the troops on the Front Line, a vital and often forgotten service. He was in France with his unit during the German’s Spring Offensive, and the subsequent Allied advance in the last months of the war.

After the Armistice, in January 1919, Davie was granted some leave to return home to Largs to visit his wife and infant daughter who was born in 1917, and it was whilst he was there he succumbed to influenza, (possibly the Spanish Flu?) which turned to pneumonia with fatal effect; he died at home on the 4th February 1919 at the age of 32. https://stories.rbge.org.uk/archives/30481 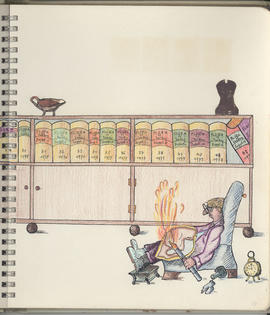 Born Somerset 1918; died Edinburgh 1992
Peter Davis’s interest in botany began in 1937 with a training post at Ingwersen's Alpine Plant Nursery in East Grinstead. In 1938 he set off on his first botanical expedition, as an amateur and on his own initiative; early correspondence with Sir William Wright Smith at the Royal Botanic Garden Edinburgh had dissuaded him from a more ambitious trip to the Andes. He visited Greece, the Middle East and Turkey, starting herbarium collections, but had to break off his trip in 1939 with the commencement of World War II. He was called up into the army and served until 1945, spending part of his time in Cairo. Immediately after he was demobbed, Davis moved to Scotland to study botany at the University of Edinburgh, taking a B.Sc. followed by a PhD. Awarded in 1952 and later a DSc. (1964). His PhD. Thesis on the taxonomy of Middle East Flora was the foundation for the project which was to become his life’s work on the Flora of Turkey and the East Aegean Islands. The first volume was published in 1965, the tenth and last in 1988. During the 1950s and 1960s Davis made many overseas trips, collecting plants in Kurdistan, Russia, Turkey and the Middle East, eventually accumulating 50,000 herbarium gatherings. In the 1970s he became reader then professor in Taxonomic Botany at Edinburgh University and was an honorary associate of the Royal Botanic Garden Edinburgh, providing the last formal link between the university and Garden, where his Turkish herbarium collections now reside. He received many awards over his lifetime including the Cuthbert Peek Award of Royal Geographical Society, the Gold Medal of the Linnaean Society of London, the Neill Medal of the Royal Society of Edinburgh, and was honoured by the Turkish government for his outstanding achievements in science. His other interests included modern art – his collection was exhibited at the Scottish National Gallery of Modern Art in 1964 - and Wemyss pottery. Under the terms of his will he endowed the Davis Expedition Fund, to assist Edinburgh students to undertake biological fieldwork abroad.
Sources: obituary folder; personal correspondence (IH); Deni Bown, ‘4 Gardens in One’.
D.W.

Born Edinburgh 1836; died Peeblesshire 1887
Alexander Dickson graduated MD from Edinburgh University in 1860, lectured in botany at the University of Aberdeen and in 1866 was appointed to the chair of botany at Dublin University, returning to Scotland as professor of botany at Glasgow until 1879. He was then appointed professor of botany at Edinburgh University (the first appointee solely to this discipline) and Regius Keeper of the Royal Botanic Garden, a post he held from 1880 until his death. While in post he inherited a number of problems over integrating the Garden with the Arboretum which remained unresolved. He was regarded as an excellent research and field botanist, his studies including work on phyllotaxis, flower and embryo development and carnivorous plants. He published around 50 papers in a number of journals including the Transactions of the Botanical Society of Edinburgh, of which he was twice president. He died in 1887 while curling near his Peebleshire home.
Sources: Dictionary of National Biography; HR Fletcher and WH Brown ‘The Royal Botanic Garden Edinburgh 1670-1970’; (Deni Bown, ‘4 Gardens in One’); (R. Desmond ‘Dictionary of British and Irish Botanists and Horticulturalists)
D.W.